What makes human communication and talking so special is imagination. Man is the only living creature that is able to talk about intangible things and believe in them. What is more, he is the only living creature that cannot live without invented truths. He has to believe in something, even when he believes that he does not believe in anything. History has given us many truths and taken away from us just as many of them. Truths that were deadly serious in their time are ridiculously funny in another. Nowadays we are living amidst a suffocating abundance of truths that are giving shape and direction to our lives. And it is within this abundance that we, the fragile and scared ones, are fighting for our own, one and only truth. Fighting for meaning and existence has made us deaf to the point that we are screaming and we cannot hear others singing their own truths. 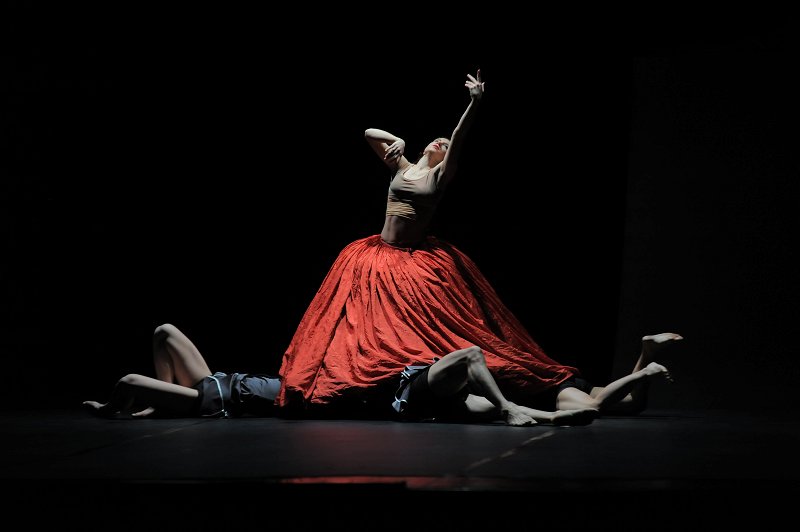 The work with a marked note of social criticism was conceived and choreographed by the dancers Michal Rynia and Nastja Bremec.

... the main idea of the performance that the dancers studied, searched for its meaning inside the spirit of the present times, and expressed through fluid, dynamic, at times softened, at times abrupt dance elements, including acrobatic ones.

We are thus watching a carefully thought-out and crafted “dance-film” rich in a movement which excellently captures the spirit of the age. This is an exceptional work not imprisoned by the prevailing social context but instead critically reflecting it. Not superficial, not based on mimesis, but requiring thought, reflection, decoding and connecting to social circumstances of today. This is art that wants to convey a message to us, the spectators, to society.

One of the outstanding attractions of the evening was the duet of the choreographers’ tandem; one clearly feels how they feel each other. Accompanied by sensual sounds of the violin (music by Diaphane, editor’s note) they fuse into one, become symbiotic; their virtuosistic, acrobatic dance elements that require precise knowledge of one’s body, sense of focus, self-control, have a very light feeling. For the rest, the dance work dynamically enacts various formations, from duets, solos, men’s quartets to septets. On the whole, the most outstanding was the already mentioned Michal Rynia with his unique, consummate, innerly harmonic movement.

Anyhow – a work that was premiered in November 2016 at the Nova Gorica National Theatre takes the spectator to an entirely new dimension of social reality and does not leave him indifferent. This is clearly proved by a standing ovation at the end of the show such as we witnessed already on last year’s first night.

And yes, the two main artists and authors of the show can be described as – significant, outstanding, inspiring elements of the Slovenian and international dance scene.

TUNNEL Imagine a tunnel through which people walk every day, a very short tunnel, an ordinary subway under a street or a railway track, one you’ve passed a hundred times without thinking. Then one time you enter and when after a couple of steps you should have been out, you’re still in a tunnel, in a very short tunnel; scores of people pass it in any given moment, you see them how easily they reach the exit, while you walk, walk, run and rest to catch your breath, then walk again, then run again, you call for help, you break things … but you can’t reach the end and although the tunnel is only a step long, half a step, a centimetre, a part of a word, you can spend weeks, months, years, decades in it and if you ever come out of it, exhausted, you learn that you were insane. Alojz Ihan