A perpetuum mobile, a hypothetical machine that moves endlessly without energy supply, is a miracle and clearly expresses the striving of a human to researching the new, even the impossible. The production is dedicated to the 570th anniversary of the visionary, artist, architect and inventor Leonardo da Vinci, who attempted to create a perpetuum mobile himself, but soon denied that it could be built. Although his genius placed him far ahead of his time, he was not able to create endless motion, but he nevertheless remained an assiduous searcher of the new and the excellent. Our international cast of dancers also researches the perpetuity of the movement and the infini- ty of new discoveries that were so dear to master da Vinci.

We like to create something out of nothing – of merely our bodies. 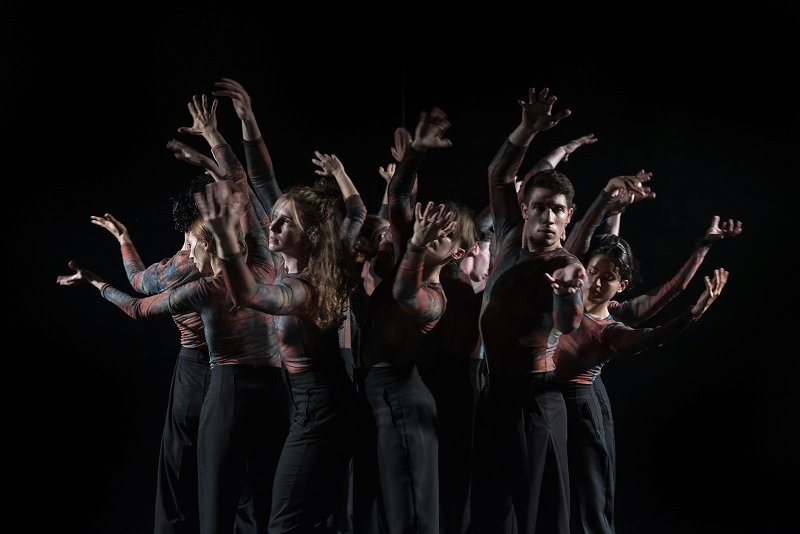 The performance of Perpetuum Mobile impressed the audience

Last night, an international cast of dancers led by the Polish-Slovenian dance couple Michal Rynia and Nastje Bremec Rynia premiered a dance narrative on the stage of the Slovenian National Theater in Nova Gorica.

This is how the applause sounded after the performance Perpetuum Mobile, which impressed the audience in Nova Gorica last night. The dance duo Michal Rynia and Nastja Bremec Rynia, through a dance narrative in their characteristic movement language, develop the idea of ​​the unstoppable movement of the body, driven by the creative force that also fueled the life and tireless creative work of the Renaissance genius Leonardo Vinci. An excellent selection of music, which offered endless possibilities of expression, the two creators imbued with repeated elements of their dance vocabulary, which echoed throughout the entire story and only found their fresh imprint in places. With a dance reenactment of themes that characterize the work of the Renaissance artist and were clearly recognizable to a large extent, the international cast of dancers successfully combined the vision of the past with modernity with an exceptionally technical and convincing performance. The entire theatrical design of the show has a thoughtful effect and supports creative thought. And if the Last Supper was the most convincing and inspiring moment of the dance performance, perhaps the nudity of the otherwise excellent costume design was the most pointless. Dance creators Michal Rynia and Nastja Bremec Rynia once again confirmed the exceptional quality of domestic dance production with the performance Perpetuum Mobile